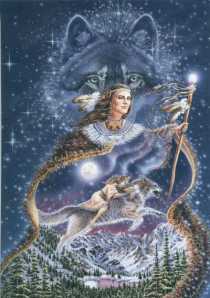 The change is upon us. Time will revert back in a few weeks. How prepared are we for the seasons to come? Up to 80 here today and down to 40’s tonight. Perhaps one last hurrah before the burst of nature’s festival of color begins.

“One last glimpse before I go to bed, please?” Nathan wiggled closer to his mother, pointing at the largest star overhead. “There she is. Tell me about the Lady and her wolf.”

Mary Stardance smiled as her young son tipped back his head, turning left and right. Living in the city, they didn’t get many clear nights. Too many street lights and car headlights to see more than a few here and there. Gazing around the cracking fire, she counted fifteen other participants. Their eyes eagerly watching her as they waited.

“I’m going to tell you a story. One our ancestors handed down by word of mouth. Many versions have come and gone. This is the one my grandmother taught me.”

“The lady wished for a handsome warrior to come courting. Someone to end her loneliness.” Mary wrapped her arm around her daughter sitting on her other side, snuggling her tight against her.

“All the eligible young men in the tribe gathered round her tepee serenading her with flute songs and stories of their bravery. Yet no young brave caught her eye.”

“Why is that Medicine Woman?” A small high pitched voice dared to ask the question many wanted to know the answer too.

“Her mother set her eyes on the stars. Look to the heavens and see your mate there amongst the greatest gift the Maker has given us.” Ohs and ahs cut through the fire’s crackling. Several of the mothers present smiled and nodded.

“One brave from a distant camp rode many days to reach Stargazer’s tribe. Upon his arrival, he asked her father for his bride price. Being his only daughter, Stargazer’s father asked for many trinkets and animal skins to fatten his daughter’s worth.”

“Oh, I know what comes next.” One small pudgy hand shot up, waving. “Can I tell it?”

Mary nodded. “Go on Tasha. What happened next?”

“The father asked for a wolf’s skin to line his moccasins for the coming winter. Little did the father know the brave’s totem was wolf.” Tasha smiled, proud of her part in telling the story.

“Yes, Stalking Wolf’s heart chilled at the thought of hunting and harming his brother and totem. He sought out Stargazer wanting to be sure she understood the error of her father’s request.”

Across the fire, a small boy jumped up. “My turn. I know what goes here. Stalking Wolf asked Stargazer to speak with her father and ask him to change his mind.”

Another youngster stood, calling out. “Stargazer went to her father and pleaded with him to change his request. He vowed no daughter told her father what to do.”

“Correct. So in the still of the night the young couple now deeply in love stole away hoping to reach Stalking Wolf’s camp without issue. Three days into their journey, Stargazer’s father and brothers came upon the young couple making love.”

One young woman, rose moving around the camp fire until she stood near Mary. “The father and brothers rained arrows into the couple’s campsite wanting to frighten them apart. Instead one arrow hit Stargazer piercing her heart.”

“Who will bring the story to a close?” Mary glanced round the circle, looking to see who would finish the tale.

An older woman stood, dusting dirt from her buckskin dress. Beads and feathers adorned portions of it. One child reached out to touch her as she passed. Her mother grabbed her hand pulling it back.

“I finish the tale.” A lone wolf cry sounded. Then another and another. “Stalking Wolf cried out for his animal brothers to come and avenge the wrong done. Before the brothers and father’s eyes, he changed into a wolf. Lunging at them, he snapped and snarled. ”

Murmurs rose and fell. Three sets of golden eyes appeared outside the light of the fire. “Come my love and finish our tale so our children may rest this night.”

A large gray wolf padded into view settling next to the older woman. His form changed and in his place a young brave stood. “Sorrowful I killed my mate’s family. I turned from her ready to run. Instead she called me to her, wanting with her last breath to pledge her eternal love. With my pack mates help, we brought her with us to our camp amongst the stars.”

Hope you enjoyed this tale. Have a great weekend!