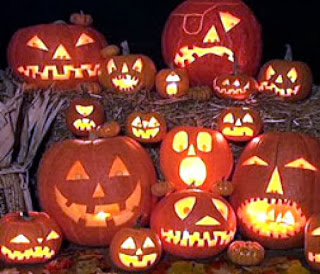 “Vernon, you wanna run that by me one more time?” Gill looked up from the pad where he’d jotted several lines of notes.

“Sure,” Vernon, ex-deputy mayor, replied. “Instead of chunking pumpkins and making a massive mess all over town, we have a pumpkin carving contest, a bake sale, a pie eating contest, and a town wide sidewalk sale. Merchants put out pre-fall and winter items at discounted rates.”

“Ya know doing the fall festival thing before the snow flies makes sense,” Louie chimed in. “Besides there’s plenty of charcoal left over that could be used for a bond fire that allowed different sections of town to have a story telling night along with block party barbecue too.”

Gill looked from Vernon to Louie and back. Both sat at conference table grinning and nodding. Talk about seeing double. It was like twin Cheshire cats inhabited his two best friends. Gill tossed his pen on his desk. He closed his eyes and inhaled. Halloween, the one night where all chaos broke out all over town. Of course, the last couple of years with more children out trick-n-treating, the revelry makers held off until curfew for the younger citizens came and passed.

“Do you think an organized celebration will keep things to a low roar?” Gill almost laughed at his own pun. Noise levels around the Peak ranged from decibel ear blasting to so quiet that even he wanted to check on everyone. Once the snows came, the partiers turned into hard workers. What could one last hurrah hurt?

“Dante and his gang are ready to spread the word about low level merriment. Since the incident with the boys from the state, quite a few more humans moved closer to town. Don’t blame ‘em.” Vernon leaned forward and picked up his pad. Louie read over Vernon’s shoulder nodding a couple more times.

Louie pointed at the pad. “Moon-Moon is willing to set up the carnival rides free of charge. His carne pack wants to winter here. They know there’s money to be made even if it’s our currency. They can set up housekeeping at the abandoned school out on highway six.”

“Is the building habitable?” Gill picked up his pen. “Last I heard the place reeked from the mammoth attack.”

“Let them clean it up. They got the man and woman power. In turn, we get rent off the place.” Vernon slid his pad across the table. “Number four also makes sense too.”

Gill pulled the pad to him. He trailed his finger down the pad, grinning from time to time, until he reached Vernon’s number four. Gill snorted and looked up. “Community hot tubs and bath houses?”

“Yes!” Louie and Vernon exclaimed together. “Remember last winter when we all ended up at your place.”

“Lord do I! Chloe asked me if that was going to happen again.” Gill slid the pad back to Vernon.

“Rather than running out of hot water, we create our own from the snow. People get to bathe and commune with their neighbors. Also, wash their clothes too. Add a few washers and dryers,” Louie said.

‘How do we pay for all this?” Gill wrote a list of possible figures on his pad.

“Revenue from the state for the repairs their boys visit caused.” Vernon leaned back in his chair.

“From the state?” Gill laid his pen down again.

Louie whistled as he read the figure Vernon wrote on the pad before he slid it back across the table to Gill. Looked like some top notch improvements were coming to the Peak.

My muse has me hard at work on another story that I’m working on the last third of.  Once that is done I can pick up with Lilly and the boys.  I got an inkling where the next chapter is going with them.  Looks like this week’s flash may be the intro for that. Perhaps one of my blog mates will take a turn at the Halloween preparations.

I hope you’re staying warm and dry. Wet cold weather arrived at the Spice Homestead.  We turned the heat on inside.  I got out a jacket too.  Even tossed a light weight fleece jacket in the car to keep handy for those chilly mornings and afternoons.

Time turns back soon, November 1.  Keeping some books handy to read and share with your spice and loves will help as night lengthens.  Discussing a passage or two, nude and joined can be very interesting.  No, I’m not letting out secrets.  Try it you might find your reading perspective changes.